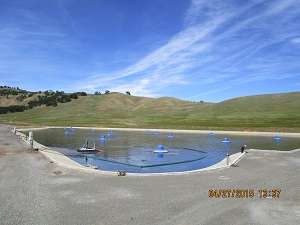 The Southeast (SE) system collects and treats wastewater in the Clearlake area. The collection system extends from Pirates Cove to Lower Lake and includes the City of Clearlake. Portions of the collection system were constructed over 30 years ago when materials, construction techniques, and inspections were not as advanced and comprehensive as they are today. Due to the proximity to the lake and the seasonal high water table, a significant amount of groundwater intrusion occurs within the system during the winter. Seasonal high lake levels and winter rains also contribute to Inflow and Infiltration (I/I) which makes up a large percentage of winter flows. The increased flows in the winter require the lift stations to operate more frequently and almost continuously during multi-day storm events. During more intensive storm events, the District historically had to hire emergency pumper truck services to maintain collection system operations and avoid or minimize reportable spill events. The force main project completed in 2013 is designed to address these winter flow issues and improve performance throughout the system. All treated wastewater is recycled at the Geysers.

The Southeast Regional Wastewater Collection and Treatment System currently include:

As of February 2013, a significant capital improvement project has been operational in the Southeast Regional Wastewater System to address previous capacity deficiencies. This $5 million project includes 5 miles of 14, 12, and 8-inch diameter force main pipe beginning at Pump Station Number 4 at the south end of the Clearlake City limits and ending at the treatment plant at the north end of the City limits. The environmental review, permitting, and design for these improvements began in 2010. The project was funded with a combination of $500,000 in capital improvement reserves and $4,500,000 in revenue bonds supported by a significant rate increase for the ratepayers in the system. The new force main also includes an intertie pipe connected to Pump Station Number 1 (near Safeway on Burns Valley Road), the largest pump station in the collection system.

This configuration addresses two chronic capacity deficiencies in the system, primarily in the Highlands Harbor area which is at the lowest elevation in the entire collection system. This portion of the system had been plagued by spills for over thirty years. The system near Pump Station 1 on Burns Valley Road had also been impacted by surcharges from severe rainfall events. In effect, this project allows hydraulic loads to be "shed" from the impacted areas by directing them through the pipeline directly to the treatment plant. In addition, future planned development for the City is provided by the capital project. It provides nearly 2,200 residential unit equivalents of capacity.

The District continues to conduct aggressive I/I mitigation and Hydraulic Modeling for evaluating the structure and capacity within the Southeast collection system. The model evaluates storage capacity and flows within the main sections of the trunk line serving the collection system. The model can be expanded into additional locations within the service area for evaluating impacts associated with new development. All new projects greater in size than 19 Single Family Dwelling Equivalents (SFDs) are required to utilize the SE model. The model identifies the areas within the collection system where infrastructure improvements are necessary to accommodate the development, capacity mitigation and costs, and shared costs for infrastructure replacement based on the percentage of use.

In 2016 improvements at the headworks of the treatment will be constructed.

The Southeast Treatment Plant contains the backbone of the Southeast Geysers Effluent Pipeline Project (SEGEP). All the treated wastewater from this facility is recycled to the Geysers geothermal field sustaining that energy production complex, supporting high-paying jobs for the County, and representing over 100 MW of power production with renewable geothermal electricity.